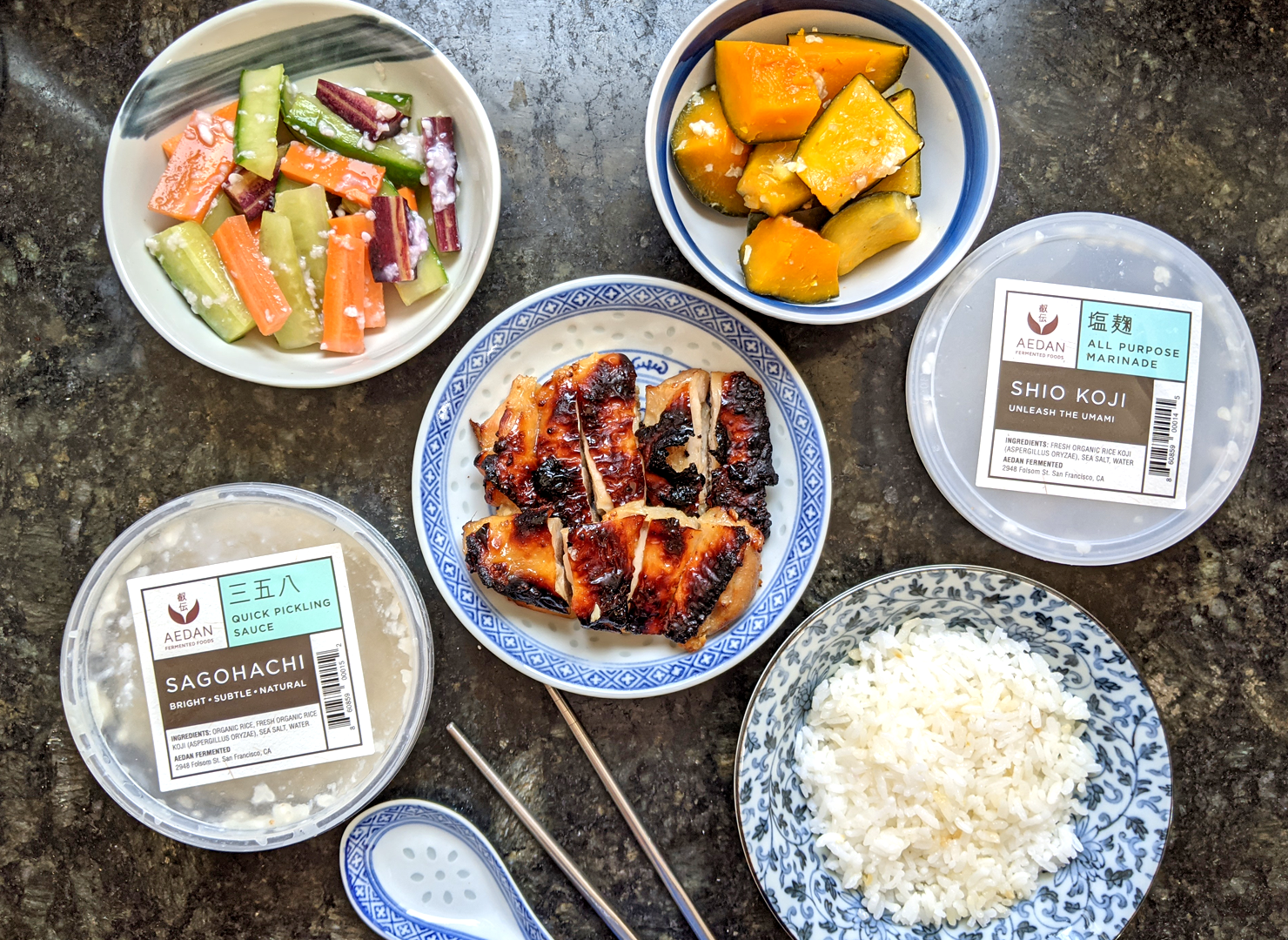 How to Create a Menu: Focus on an Ingredient

There are many ways to come up with a dinner plan, and one of the most fundamental ways is to center your menu around a central ingredient.

Think of it like Iron Chef (a cooking competition TV show popular in the 90’s and 2000s, originally from Japan) – except you get to pick your special ingredient, and figure out how you want to showcase it.

For this dinner plan, I was inspired by koji, a type of fermented rice inoculated with mold. Koji is used to make soy sauce, miso, sake, mirin, etc.

“Inspiration” in this case was a confluence of two events:

With my precious special ingredient in hand, I set off to make my dinner plan, leaning heavily on recipes from Just One Cookbook.

Voila! Shio Koji Chicken, Simmered Kabocha with Shio Koji , and Sagohachi Pickled Vegetables, served with a Japanese short grain rice (both the traditional and practical choice). Every dish features koji fermented rice – except for the plain rice of course.

You can find Just One Cookbook’s recipe for her Shio Koji Chicken here. Having never had shio koji before, I had very little expectations for what this would taste like, besides vaguely of umami. Like many others, I will fail to describe the taste in words. It does have a special umami flavor, with a little hint of sweetness. I found the flavor extremely tasty, and will add this recipe to my weekly meal rotation.

Simmered Kabocha with Shio Koji – also another one of Just One Cookbook’s recipes.

Actually, my dad grew these kabocha! He had given me a bunch the last time I visited.

The Sagohachi Pickled Vegetables recipe was from Aedan’s pamphlet and site. In addition to cucumbers, I used both orange and purple carrots for the beautiful colors.

While my Japanese isn’t so sharp, I am able to read enough kanji to be mystified by its name – “sagohachi” translating to “three-five-eight”. Turns out that the name comes from its ingredient ratio of 3 parts salt, 5 parts koji, 8 parts steamed organic rice. Seems to be a winning ratio because these quick-pickled vegetables were delicious!

I thought all these recipes were fantastic tasting and easy to make, so I’ll be adding it to my recipe rotation, providing I can get my hands on the special ingredient: koji. Perhaps one day I will make the leap to make my own…but that’s a topic for another day.

My first kimchi! Compared to other ferments I’ve

🤔When do you need a refreshing cocktail?⁠ ⁠

To all my fellow Bay Area amateur cooks, I urge yo

If you want to enjoy the pure flavor of tomato in

When you go glamping, you have to have some ✨gla

Have you ever dreamed of catching a fish...and eat

Have you ever heard the term “catch and cook?”

If you love corn cheese, you’ll love these air f